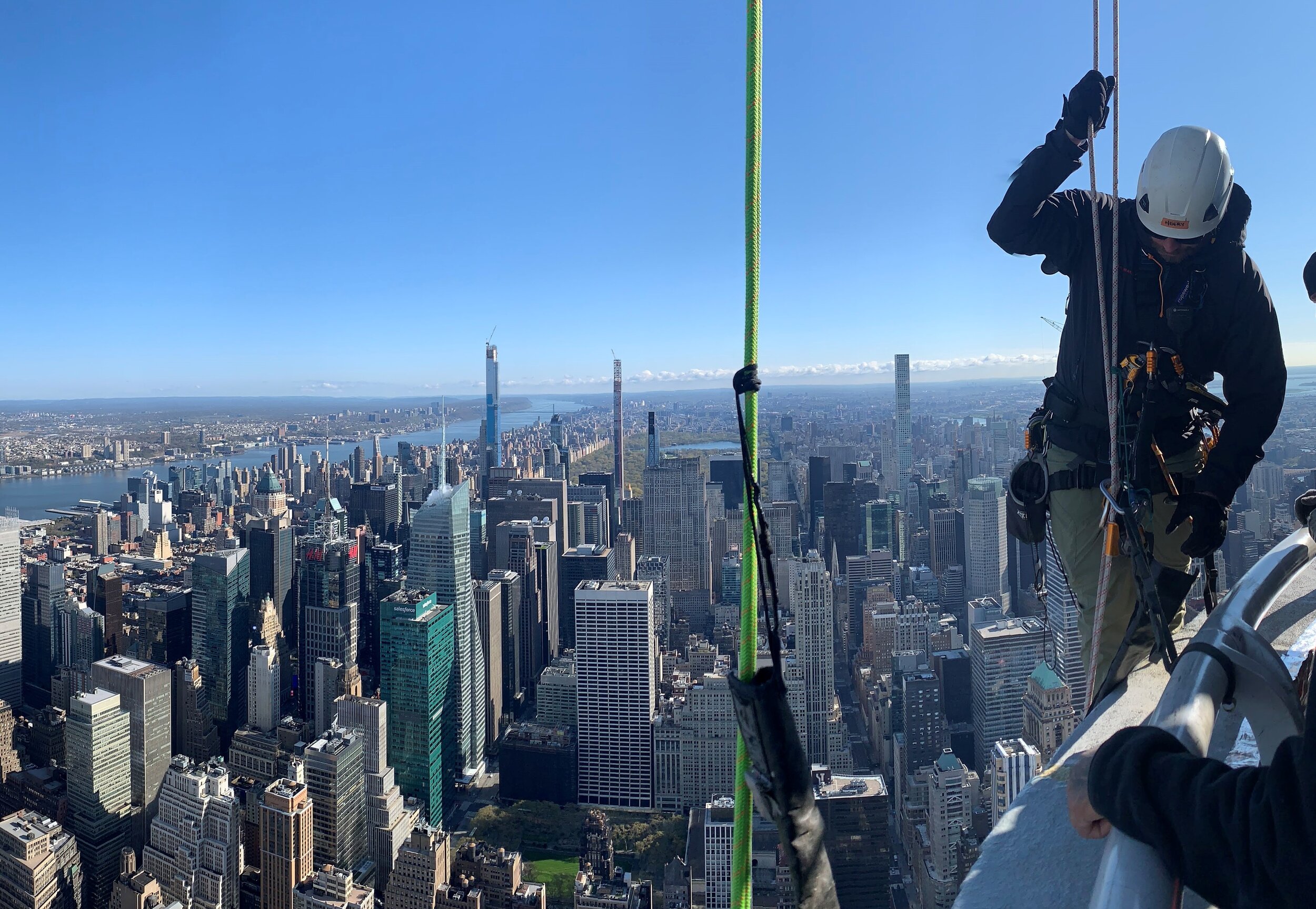 CANY and Cole NYC were contracted in June of 2019 to remove decommissioned antennas from the Empire State Building’s Mooring Mast and restore the cast aluminum cladding and upper dome. Antenna and equipment removal commenced in November of 2019 and continued until May of 2020. Restoration and waterproofing of the mast began in conjunction with the removals and will culminate with the reapplication of an historic aluminum coating first introduced in the 1960’s to restore the appearance of the original cast aluminum. Cole NYC was contracted to perform the antenna removals while CANY was tasked with engineering and designing repairs to the historic cast aluminum façade, with all work directly supervised by NYC Master Rigger, George Cole. All work and inspections were performed via Industrial Rope Access (IRA), a highly regulated means of work-at-height that incorporates intensive training and rigorous operational standards and boasts a safety record unrivaled by other means of construction access. Most work was performed at night to allow for unimpeded operation of the building’s observation decks.

Once the base scope of eight antennas was complete, an additional four 10-15-foot decommissioned antennas were removed. At each antenna location the associated dunnage, conduits, steel support plates and anchor plates were also taken down, and the penetrations repaired. Throughout the antenna removal process, CANY identified additional abandoned and obsolete equipment and appurtenances that were eliminated by Cole NYC; including four ladder, platform, and railing systems used to access the principal antennas.

The antennas were dismantled in place with each section individually secured prior to deconstruction and lowering. Each disassembled piece, weighing up to 600 lbs., was then lowered via a tramway designed and implemented by the Master Rigger to the base of the mooring mast, two floors above the 86th floor observation deck. From the start of the removals until March 2020, all work was performed from 2am until 6am in order to keep the open-air observation deck accessible to the public. During the NYC Covid-19 shutdown from March-July 2020, work proceeded during the day. As the work was related to essential infrastructure, the project was able to continue without interruption. Following reopening of the observation deck on July 20, 2020, work again moved to nightshifts.

During the initial inspections and through later sample removals, CANY identified multiple penetration types that required individual repair treatments. Penetrations through the cast aluminum ranging from as large as 4’0” x 6’0” to as small as 2” x 2” were repaired using a variety of aluminum plates and castings. At locations where previous equipment had been secured with bolts and where abandoned mesh- antenna attachment plates studded the façade, a waterproof bolt repair was designed provide continuity of waterproofing and minimize visual impact. Restoration was augmented by replacement of all original sealant joints at the cast aluminum panels, restoration or replacement of historic portholes with comparable period assemblies and cleaning and recoating of the aluminum façade.

At the upper portion of the mast, penetrations were repaired with flat-plate aluminum panels, stainless steel bolts, and sealant compatible with the cast aluminum. Where the penetrations cut through the aluminum at chevron profiles in the original castings, shaped aluminum plates were fabricated on a brake to match the existing profile. At the lower portion of the fin, penetration repairs were made using a combination of custom aluminum castings and formed aluminum plate in order to restore the complex sculptural profiles. The castings were created using by Allen Architectural Metals of Talladega AL using an ARTEC scanner to record the shape of the sculptural fins and create molds. The molds were then employed by ‘Bama Foundry to create new aluminum panels using historic sandcasting techniques.

Implementation of this traditional casting method produced organic variations harmonious with those of the original panels. For the flat-plate aluminum repairs, a sandblasted surface-finish was applied to replicate the historic sandcast texture.

To complete the mast restoration, additional repairs were made beyond of the base scope of penetration- repairs. Five antenna access hatch doors, comprising original historic cast aluminum cut from the façade, were removed, waterproofed, and bolted into place, restoring the integrity of the original cladding. Six large sections of historic cast aluminum with compound cuts and patches , located at previous major antenna penetrations, were reworked to consolidate and repair exterior finishes, greatly improving the final aesthetic appearance and waterproofing performance. Lastly, twelve portholes manufactured by Wilcox and Crittenden and installed in the early 1950’s were removed, cleaned, waterproofed, and

reinstalled. At two locations the portholes had been irrevocably damaged by antenna penetrations and were replaced in-kind with historic portholes from the same era and manufacturer. One of these came complete with provenance from the ‘Improvisor" an old Downeaster-style cabin cruiser hailing from Atlantic City, beginning a second career atop the ESB.

All completed work was water-tested by Cole and CANY in accordance with AAMA 501.2, (“Quality Assurance and Diagnostic Water Leakage Field Check of Installed Storefronts, Curtain Walls, and Sloped Glazing Systems”) to demonstrate the efficacy of repairs. Where leakage remained or was discovered during testing, additional protocols were implemented and areas retested, until all of the significant leakage experienced in the mast over the years had been eliminated.

After completion of initial construction in 1931, the mooring mast aluminum was exposed to the elements for thirty-one years, resulting in the formation of a stable, dull-grey oxidation layer. In the 1960’s, an alkyd- based aluminum flake paint was applied to improve the appearance. Almost 60 years later, the coating had significantly weathered, and subsequent removal of mesh antennas had left large areas of unpainted original aluminum exposed, creating large dark-grey patches, marring the appearance of the mast. As the final step in the restoration process, the newly restored and waterproofed cladding is being properly clean and prepped and the mast fully coated with an historically-compatible alkyd-based aluminum flake paint to prevent further oxidation and reestablish the original appearance of the cast aluminum.

As the Mooring Mast Restoration Project nears completion, work will begin on the restoration and waterproofing of the upper balcony and dome. Project scope includes removal of the existing membrane at the top of the dome (applied as a waterproofing measure in the 1990’s) and restoration of the historic cast aluminum and chromium steel substrate. Work will include uncovering and restoring the original porthole windows at the top of the dome, waterproofing installation at the parapet and balcony surfaces, and replacement of the existing access door and principal window at the 103rd floor exterior observation level – the “Faye Wray balcony” from the original “King Kong”. 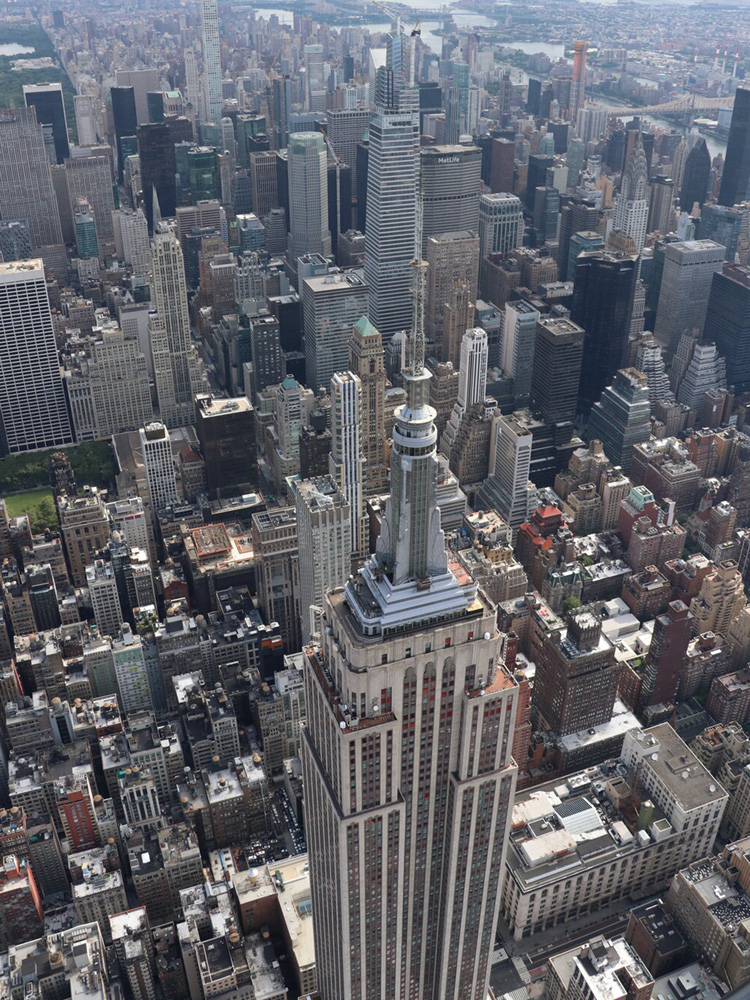 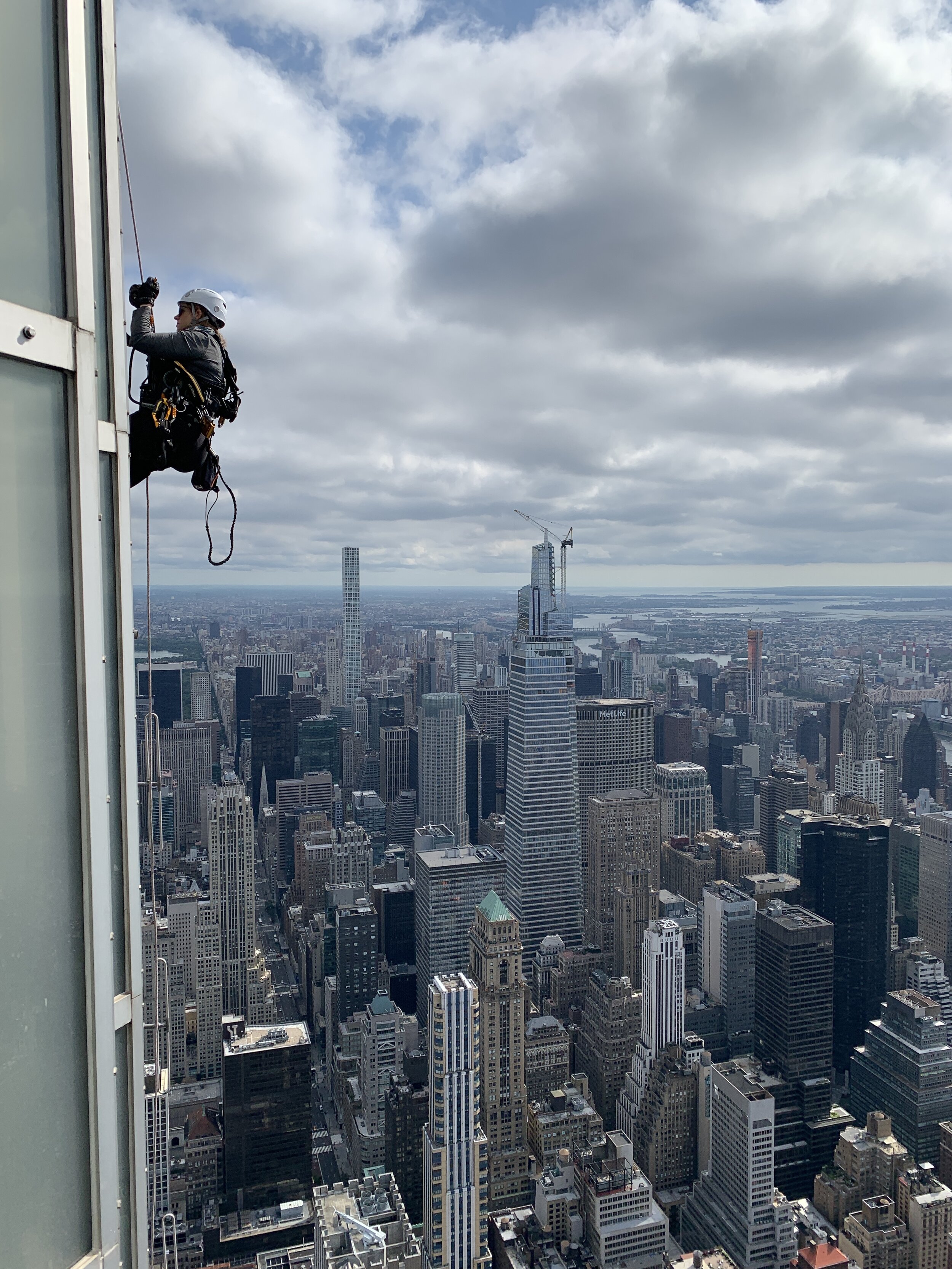 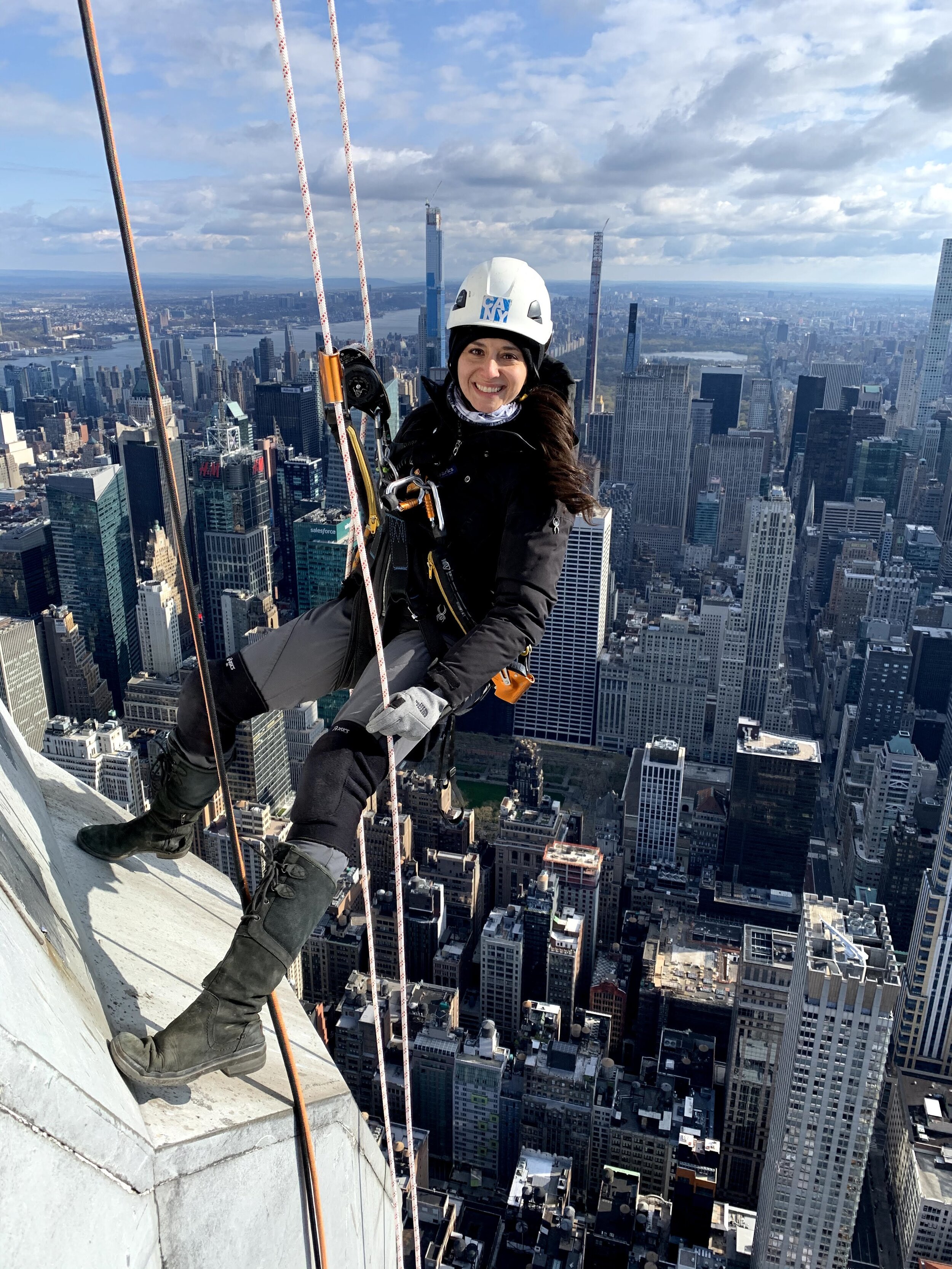 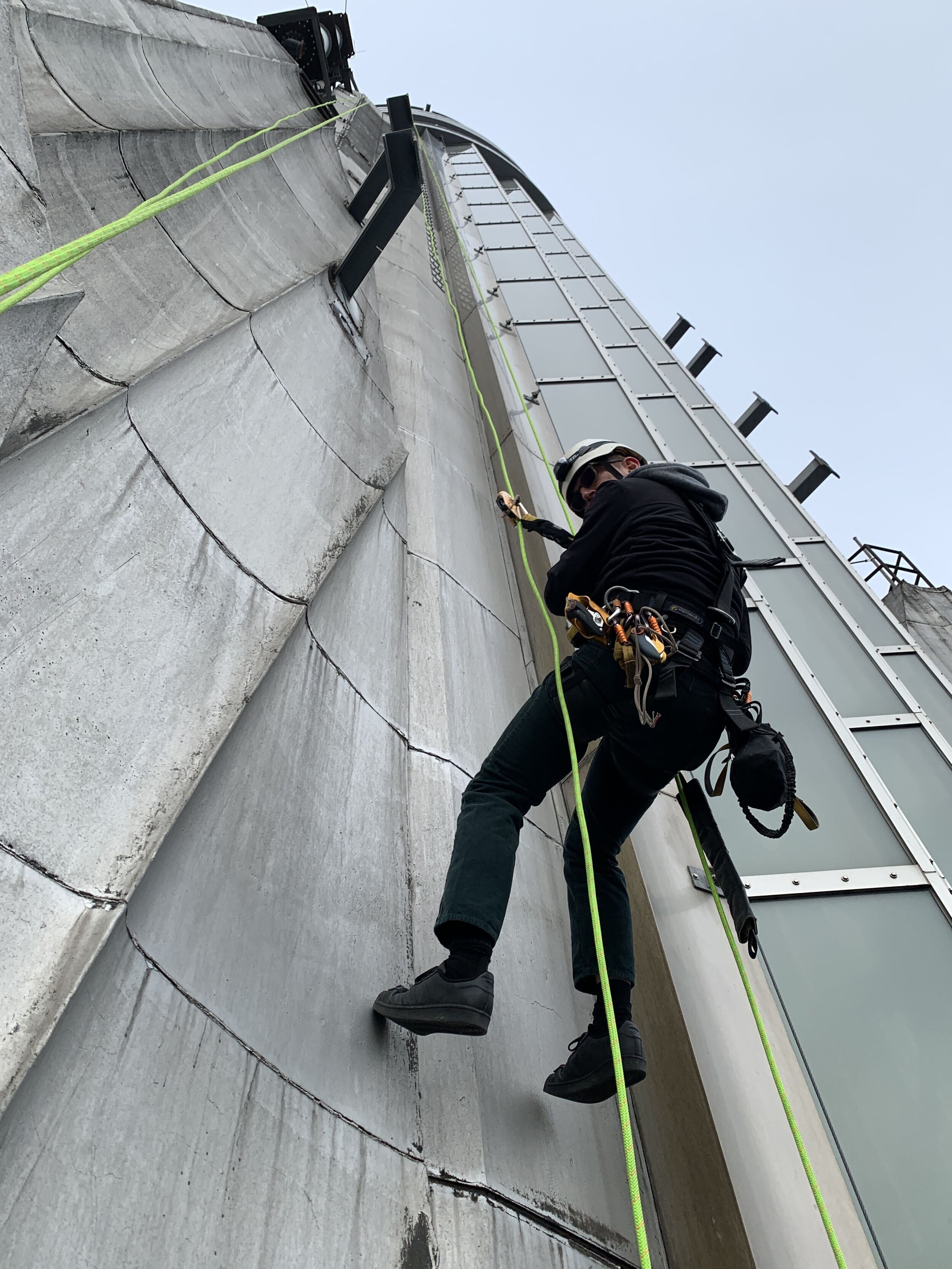